Earning an MBBS is sacrosanct to your becoming a medical doctor. This is a standard practice all over the world. There are a number of universities in the world that offer high-level medical training to medical students and adequately prepare them for the job. In this post, we’ll show you the top 10 medical universities in Africa. In addition, you’ll also get to know the cost of getting medical training in those schools.

Being the second biggest continent in the world, Africa is home to a number of universities that provide medical training to thousands of medical students all over the world. Altogether, there are over 200 medical schools in 54 African countries. But which of these schools offers the best medical training when compared with their counterparts in other parts of the world? Well, this is exactly the question this post intends to answer.

This list contains schools from all the regions in Africa. This shows that no region is left behind when it comes to medical training. Now, let’s delve into the list of the top 10 medical schools in Africa. This list is adapted from the Times Higher Education’s World University Ranking. South Africa dominates the list with 4 universities represented. Egypt has 3 universities (representing North Africa). Other countries include Uganda (representing East Africa), Nigeria, and Ghana (Both representing West Africa) each with 1 university. Before we look at the list properly, let’s take you through some reasons why you should consider pursuing a career as a medical doctor.

Why Should You Consider Going to Medical School?

Maybe you are a prospective medical student but are still contemplating whether you are making the right career choice or not. We are not going to explicitly give a yes or no answer to that. In this section, we are going to highlight some of the reasons you should consider pursuing this career path. If these reasons appeal to you, then go ahead and enroll in any medical school.

There are numerous reasons why you should consider studying medicine and surgery. For sake of space, we will only highlight a few of such reasons:

If you are looking for information about medical schools in the UK, click this link

Before you embark on the journey, note the following: 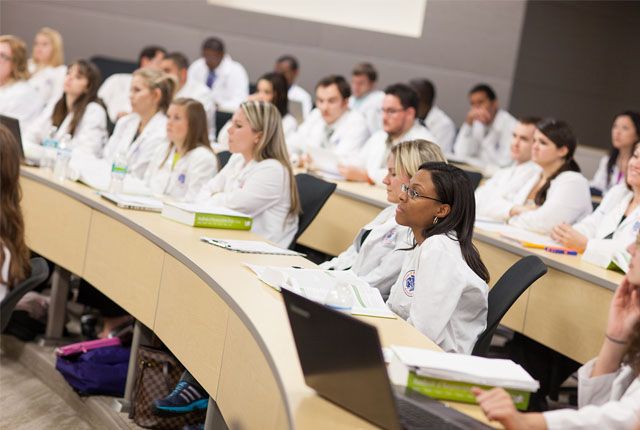 The University of Cape Town provides the best medical training to medical students in Africa. UCT was founded in 1829 and offers degree programs across six faculties including Commerce, Engineering & and the Built Environment, Health Sciences, Humanities, Law, and Science.

The multicultural, multinational institution provides medical training to over 22, 500 international students from over 100 countries in the world. It is the best medical university in Africa.

Cost of Medical School at the University of Cape Town

2. University of the Witwatersrand, Johannesburg

The university has state-of-the-art facilities and a very conducive learning environment. Since its inception, Wits is renowned for its consistent training and production of world-class students, including medical doctors.

There are over 1200 experienced medical and dental consults that offer quality training to medics in different research programs. These programs include Anatomical Science, Public Health, Clinical Medicine, Oral Health Sciences, and Pathology. It also has specialized courses such as Therapeutic Sciences, and Physiology.

Cost of Medical School at the University of Witwatersrand

Tuition fees for MBBCh in Wits range from R70, 350 to R85, 000 per year, all-inclusive. This cost depends on the number of years of study.

Cairo University is one of the oldest institutions in Egypt. Its Faculty of Medicine was established in 1827 and is the largest and oldest medical institution in the Middle East.

When it comes to medical training, CU is ranked third best in Africa and the best in Egypt. It has an enrollment rate of over 257, 000 students and an acceptance rate of 95%. CU Faculty of Medicine comprises 35 different sections in different medical specializations.

This institution has been providing high-quality training through theory and practical knowledge to medical students. Because it is a multinational institution, English is the language of instruction. About 4% of the over 257, 000 student population of the institution are international students. If you want to know more about how you can become a medical doctor in Egypt, read our post on How to Become a Medical Doctor in Egypt.

This medical school is one of the largest educational institutions in Africa and in the Middle East. It is the fourth-best medical school in Africa, according to the ranking. It has a student population of over 18, 000 and an acceptance rate of 73 %. Like Cairo University, the language of instruction is English

The 15 faculties of the university and the several research institutions are located on seven separate campuses. There are living facilities for students provided on campus as well as sports and recreational facilities. If you are interested in studying at Ains Shams University, read our post on Ains Shams University Admission Requirements to get started.

Stellenbosch University medical school is the third-best in South Africa and fifth-best in Africa. Stellenbosch is the oldest university in South Africa. It is reputed for designing and manufacturing Africa’s first microsatellite, SUNSAT, which was launched in 1999. It is also the first African university to sign the Berlin Declaration on Open Access to Knowledge in the Sciences and Humanities.

SU has over 150 departments that are scattered among the 10 faculties across five campuses. It also has more than 40 research institutes. The Faculty of Medicine and Health Sciences is situated in Tygerberg.

The University has 34 residence halls for students. Of the over 32, 000 student population, over 4,000 of them are international students from 100 different countries. The University has about 3,300 full-time staff members and 352 postdoctoral fellows.

Mansoura University has the third-best medical school in Egypt and the sixth-best in Africa. Established in 1962, the university started as a faculty of medicine under the authority of Cairo University. It metamorphosized to East Delta University in 1972 and was later renamed Mansoura University a year later.

The university is well organized with 11 faculties, accommodation complexes, a student hospital, a restaurant, a dining hall, and a well-equipped sports complex all located in the city center. It has a student population of 42, 000.

Medical training at this university is top-notch. The university has nine major hospitals and medical centers. It is renowned for having the largest Urology and Nephrology Centre in the whole of Africa. The Urology center was established by the renowned Egyptian urologist Mohamed Ghoneim.

The University of Pretoria has one of the oldest medical schools in Africa.  It was established in 1943 and since then, this institution has produced thousands of successful medical doctors. Pretoria University has nine faculties, two of which are divided into schools and headed by chairpersons. These nine faculties accommodate the 141 academic departments as well as related centers, institutes, and bureaus.

Pretoria University is home to thousands of international students from across the world. It has a student population of 56,483. Medical training is offered by a large number of highly qualified medical and dental consultants.

Pretoria University has the fourth-best medical school in South Africa and the seventh-best on the continent.

Cost of Medical School at PU

The tuition fees for MBBCh at PU range from R65, 000 to R80, 000 per year, all-inclusive. This cost depends on the number of years of study.

Popularly known as UI, it is the premier university in Nigeria and the first university from the western region of the continent to make the list. UI was established in 1948 as a college of the University of London. However, it attained independent status in 1962.

UI has the best medical school in Nigeria and has consistently been ranked as the best university in Nigeria by different bodies. It started out as a small institution with just three departments in sciences and the Arts. Today, the school has expanded to thirteen faculties.

In addition, UI’s Postgraduate School is the largest in Africa, with its undergraduate and postgraduate student populations split 50/50. Around a third of all students live in university-provided halls of residence – modern facilities that come equipped with gyms, cafes, and common rooms. UI has a student population of over 42, 000. 1% of this population are international students from different countries of the world.

The school has a hospital, The University College Hospital (UCH) that provides research and hospital teaching to medics. UCH is the flagship tertiary healthcare institution in Nigeria.

Cost of Medical School at UI

UI offers one of the cheapest medical training in Africa and in the world. The tuition fees for MBBCh in UI range from N115, 700 to N130, 000 per year, all-inclusive. This cost depends on the number of years of study.

Makerere University is Uganda’s oldest and best university. It was established in 1922 and in 1949, it became known as University College, affiliated with University College London. It attained independent university status in 1970 and since then, it has provided quality training to both undergraduate and postgraduate students. Like the UI, it is the only university in Uganda to make the list

Makerere University has a student population of about 38,000. It has 10 constituent colleges and boasts partnerships with government, industry, and other universities.

Cost of Medical School at the Makerere University

The tuition fees for MBBCh in Makerere University range from UGX1, 344,000 to UGX2, 240, 000 per year, all-inclusive. This cost depends on the number of years of study.

The University of Ghana has one of the best medical schools in Africa. It was established in 1948 as an affiliate of the College of the University of London. UG attained full university status in 1961. It is the largest and oldest university in Ghana.

Popularly known as the ‘Legon,’ the University of Ghana has a notable population of 30, 000 students which includes over 1, 000 international students.

The key research focus of the university is in the areas of seismology, ecology, migration studies, and population studies. The University of Ghana is in partnership with the Commonwealth Universities student exchange consortium, and Norwegian Universities. It is reputed to have a vast library tagged Balm Library, comprising numerous numbers of books ranging over 300, 000 volumes.

Cost of Medical School at the University of Ghana

The tuition fees for MBBCh at the University of Ghana range from GH¢7, 500 to GH¢9, 500 per year, all-inclusive. This cost depends on the number of years of study.