Smart employers know that keeping quality employees requires providing the right compensation and benefits package. Compensation includes wages, salaries, bonuses and commission structures. One of the greatest motivations for accepting a job offer or choosing to stay on the job is the salary incentive/wage. This article highlights the top 10 countries in the world with the highest salaries. If you’re a graduate looking for opportunities, you’re in the right place. 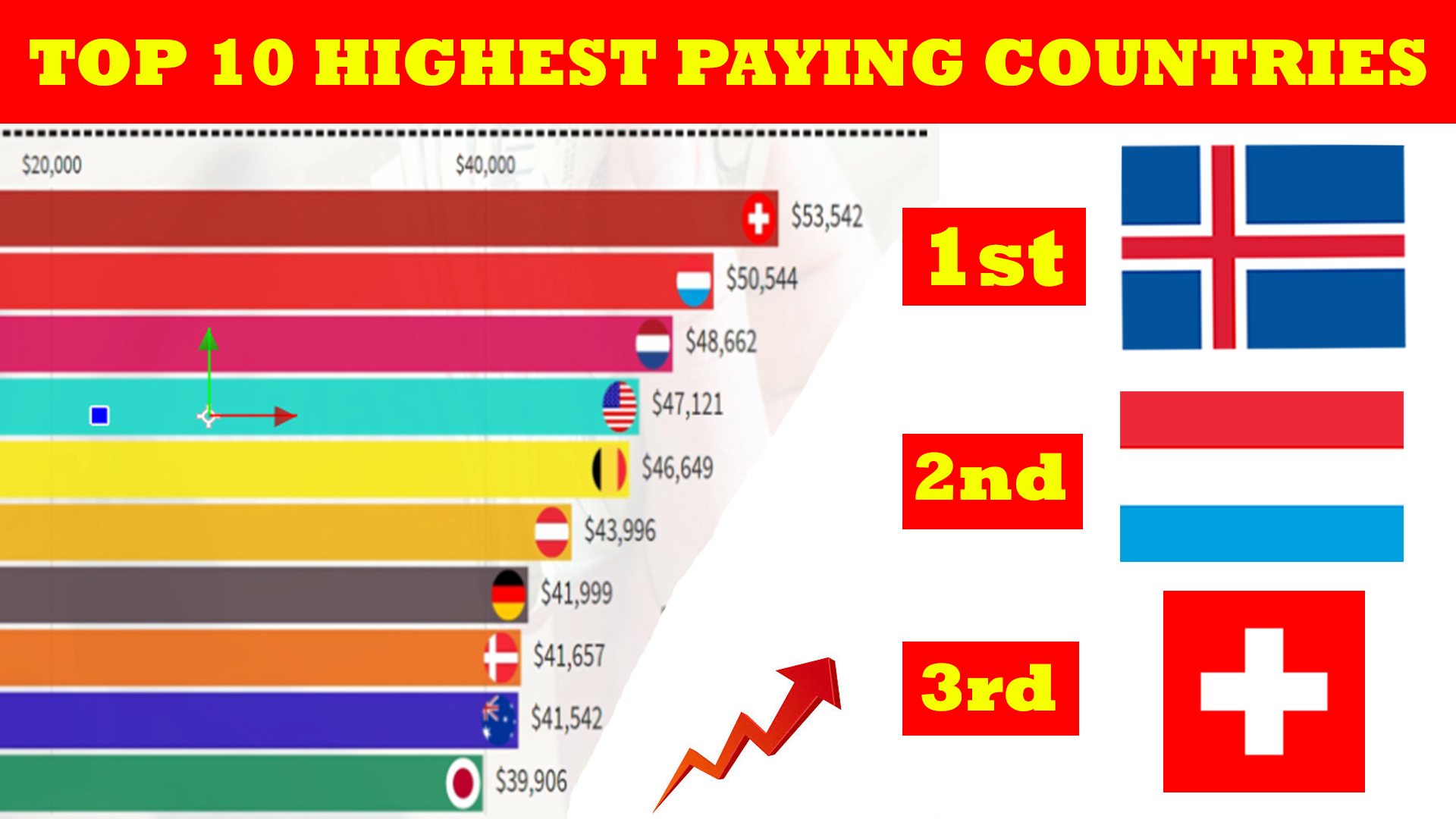 Read Also: Top to most educated countries in the world 2022

As of November 2020, 77 countries and territories are classified by the World Bank as high-income countries. Some of these countries, such as the United States, have consistently held this classification since the 1980s. However, this article highlights only the top 10 countries with highest salaries, best compensation and benefits package for their workers.

Top 10 Countries with the Highest Salaries 2022

The country’s economy is largely dependent on the banking, steel, and industrial sectors. Luxembourgers enjoy the highest per capita gross domestic product in the world (CIA 2018 est.).

Luxembourg’s economy is quite similar to Germany’s and enjoys a degree of economic prosperity very rare among industrialized democracies.

With a population of 632,000 Luxembourg is one of the world’s wealthiest and highest-paying countries. Salaries of workers average about $68,681, which is the highest in the world. The primary industries include banking, finance, steel, mining, telecommunications and tourism.

Iceland has a mixed economy with high levels of free trade and government intervention. However, government consumption is less than other Nordic countries. Hydro-power is the primary source of home and industrial electrical supply in Iceland.

The average annual salary for workers in Iceland is $68,006. The total monthly salary including bonuses vary drastically among different job categories. Iceland is one of the smallest nations on the planet, with a population of just 350,000. On the contrary, it is also one of the most expensive countries to live in the world.

Switzerland has one of the world’s most advanced and highly-developed free-market economies. The Average annual salary for workers is $66,567.

This prosperous and vibrant country offers its people some of the highest salaries in the world. Although the country is landlocked, it has excelled in many areas including finance, banking, chocolates, electronics, pharmaceuticals, watches and tourism.

Many of the world’s top multinational companies have their headquarters in Switzerland.

The United States has a population of 326.7 million people and is the country with the highest disposable income per capita measure of $65,836. In 2018, the country’s GDP was $20.58 trillion. Key sectors in the U.S. include financial services, professional and business services, manufacturing and health care.

An American worker works an average of 44 hours a week. It is interesting to mention here that American employees get salaries every week in most of the companies. Regardless of your field be it engineering or a teacher, you will earn well.

The economy of Denmark is a modern mixed economy with comfortable living standards. It has a high level of government services and transfers, and depends highly on foreign trade.

Minimum wages in Denmark are not defined, but still, this country has the lowest income inequality in the world. Workers in Denmark smile home with $57,150 annual pay. Due to the high salaries and good working conditions, this country is known for the happiest workers also.

The Netherlands has always boasted a high standard of living. Many surveys indicate that Dutch people are content with their lives because of their excellent healthcare system and outstanding schools. Netherlands has a largely multilingual population with a fair pick of job opportunities within the European Union.

The country’s economy is based on international trade because it has the largest ports in Europe. It also has one of the lowest unemployment and inflation rate. In Netherland, people have to work on an average of 35 hours a week. The average annual salary for workers is $56,552, making it one of the highest in the world.

Overall, The Netherlands has an exceptional agriculture and fishing industry, advanced electrical and mechanical engineering industries, pharmaceuticals, tourism and microelectronics.

Germany has the biggest economy in Europe and is also one of the most developed and wealthiest nations globally. The per capita income in Germany is roughly $56,000. The country has a solid infrastructure and a well-developed schooling system. It also has some of the best health care facilities globally, and equal distribution of wealth. In addition, Germany maintains a diverse list of lucrative industries that have been critical to the national economy. Notable industries include pharmaceuticals, health care, manufacturing, tourism, transportation and farming. Indeed, there are numerous jobs across several sectors, as the country is quite large.

Belgium has always been known for the highest standards of living and education. The country is most famous for its beer, chocolates, transportation, engineering, car assembly, scientific instruments, textiles, and tourism. The average salary for Belgians is $55,590. Fortunately, unlike other countries in the region, getting a job is not that difficult if you live in the European Union while outsiders need an EU work permit.

An employee here gets an average of $54,401 per year. Employees work for 35 hours a week. Whatever work done after 35 hours is be considered overtime and the employer pays separately for that.

Norway is one of the most expensive places in the world, and according to the World Bank and IMF, Norwegians have the fourth-highest per capita income in the world. The country has a thriving gas and petroleum industry which brings in the most money. Norway is also a well-known exporter of fish, timber, textiles and aquaculture. Besides having a very low crime rate, Norwegians are also rated as one of the happiest people in the world.

Employees in Norway earn an annual salary of $54, 027, one of the highest in the world.

Norway is a natural resources-rich country with abundant oil, forest, and other natural resources. The country has a high tax rates but offers high-quality health services and higher education for free.