Egypt is known for its ancient wonders and magnificent buildings. It is popularly known as the land of pyramids. Built for the tombs of the pharaohs, the giant Egyptian pyramids are a thing of wonder and amazement for many tourists. Even though it is a great place to go if you are a tourist, the education fees of Egypt are quite high for international students.

In addition, Egypt is also a location for various affordable universities that offer a wide range of courses, in undergraduate, master’s, and doctorate programs. Egypt Scholars is presenting to you a detailed list of the 10 cheapest Universities in Egypt, as well as relevant information on how you can make your stay worthwhile.

The Ministry of Higher Education supervises the tertiary level of education. There are a number of universities catering to students in diverse fields. In the current education system, there are 17 public universities, 51 public non-university institutions, 16 Private Universities in Egypt, and 89 private higher institutions. Out of the 51 Non –university institutions, 47 are two-year middle technical institutes (MTIs) and four are 4–5 years higher technical institutes’.

In 1990, legislation was passed to provide greater autonomy to the universities. But still, the education infrastructure, equipment, and human resources are not in place to cater to the rising higher education students. Gross enrolment in tertiary education increased from 27 percent in 2003 to 31 percent in 2005.

I have compiled the list of some of the cheapest Universities in Egypt that are favorable to international students.

1. The American University of Cairo (AUC)

Located in the heart of Egypt, the American University of Cairo offers their courses in English, and they are an American-accredited research-based institution. A degree from AUC is accepted by universities in the USA  since it is accredited internationally. Established in 1919, the AUC is one of the top universities in Egypt since it has accreditation both in America and in Egypt.

The following are the tuition rates per semester for the academic year 2018-2019 for new and current students:

The following are the undergraduate tuition rates per semester for the academic year 2020 – 2021 for new and current students:

The following are the non-degree tuition rates per semester for the academic year 2020 – 2021:

The Mansoura University is located in the middle of the Nile River delta in a big city called Mansoura. Founded in 1962, the Mansoura University was established to teach students in medicine and nursing. Because of its location, it was called the East Delta University, but it later changed its name to what it is now in 1973.

Note: The Tuition fees are paid in USD 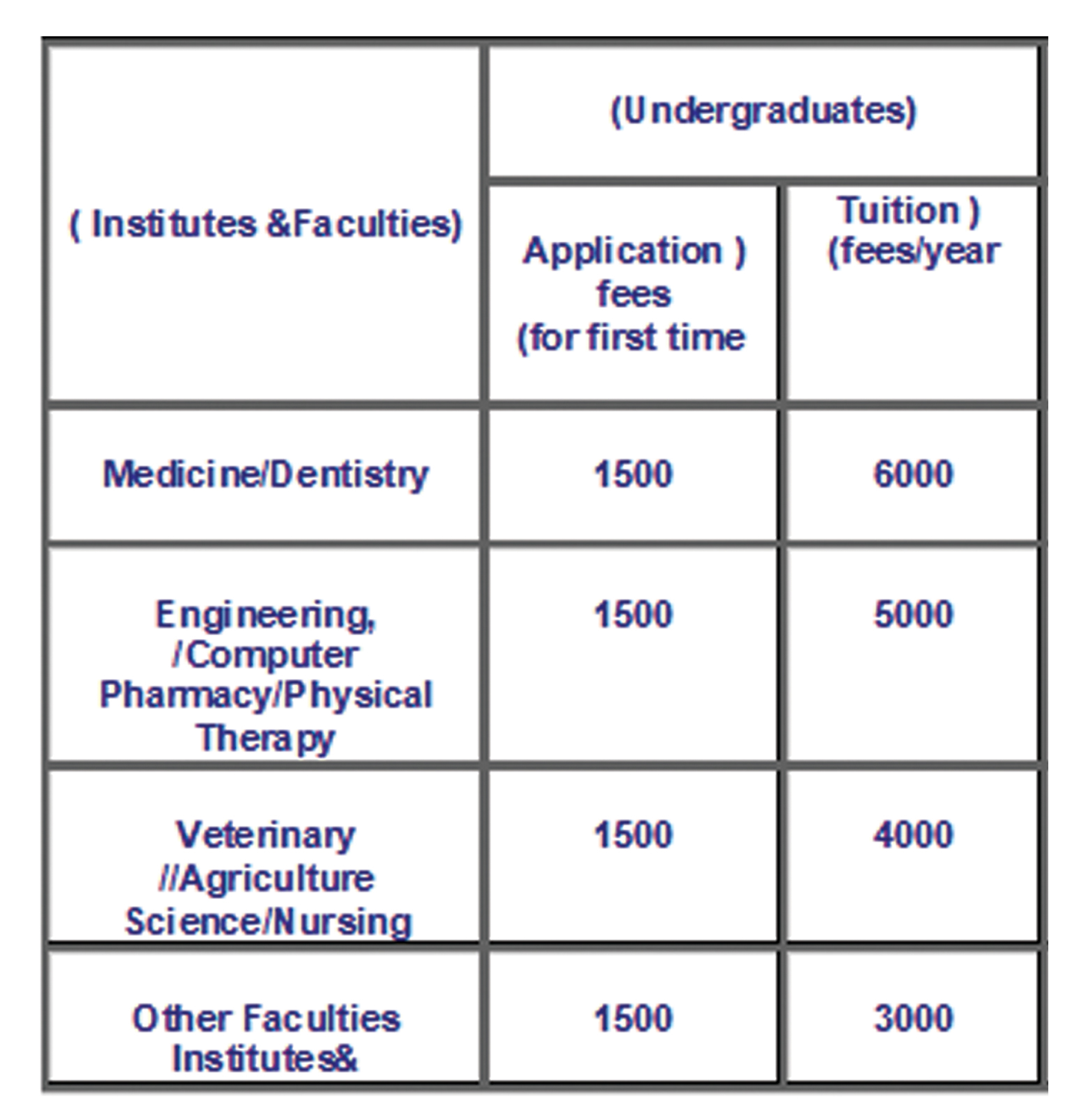 Note: The Tuition fees are paid in USD 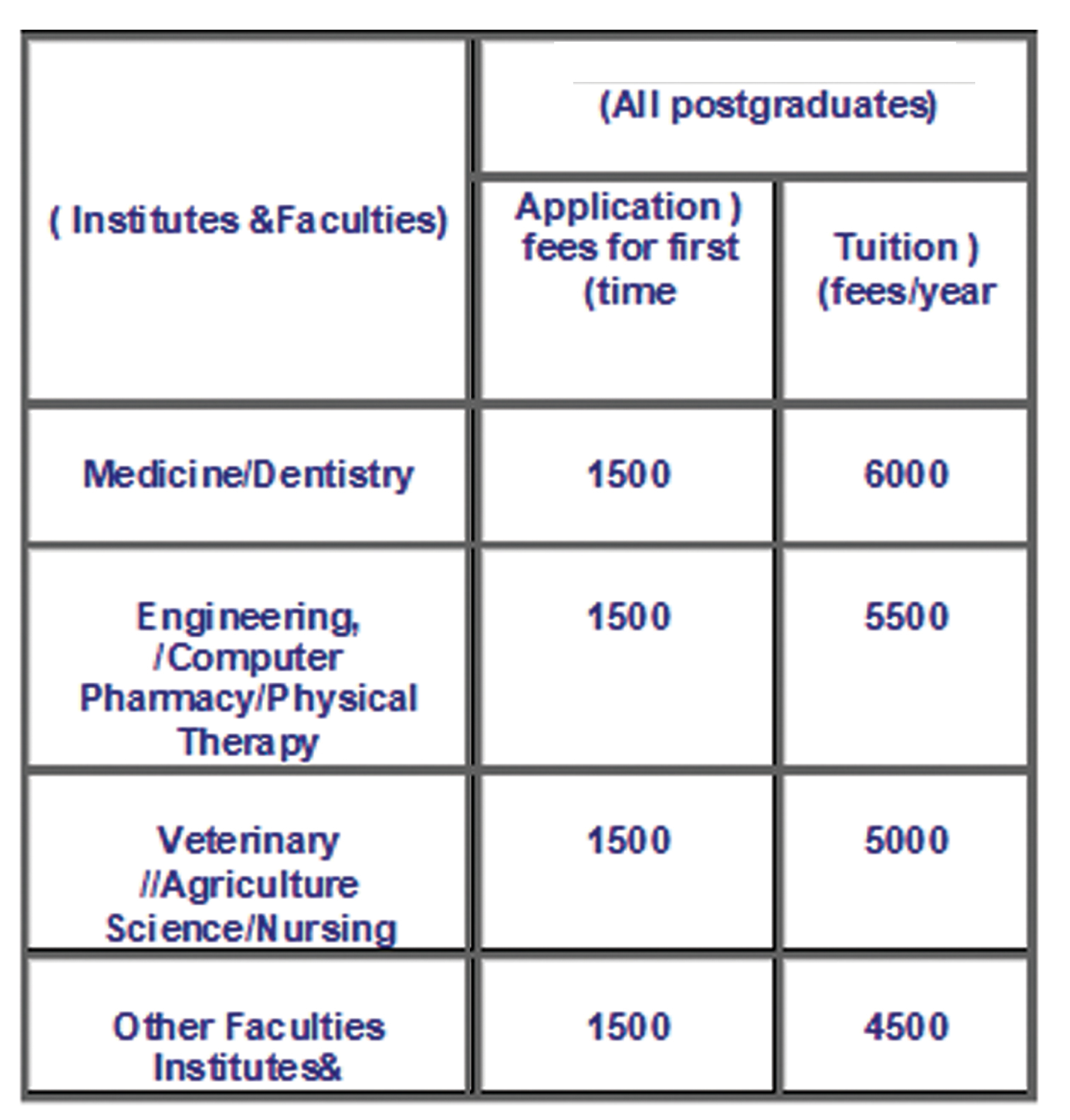 This University is supported by the German government. The German University in Cairo is an Egyptian private university that was founded by the collaboration between the Education Department of Germany and Egypt. Managed by a host of Germans and Egyptians, the GUC continues to strengthen the bonds between Germany and Egypt by their education system. Many of their programs involve exchanging students between the two countries, and many students have learned and mastered the working environment of both countries.

The following table describes the tuition fees to be paid in Egyptian pounds (or Euros for non-Egyptians) Per Semester for the academic year 2019/2020:

CU is the second oldest tertiary institution in Egypt after Al Azhar University, notwithstanding the pre-existing higher professional schools that later became constituent colleges of the university. The University currently enrolls approximately 155,000 students in 22 faculties which include a school of law and school of medicine.

Among the public universities in Cairo, CU is regarded as one of the 50 largest and populated universities by enrolment and has produced three Nobel Laureates and notable alumni which include Boutros Boutros-Ghali, sixth Secretary-General of the United Nations, Saddam Hussein, former president of Iraq, Mohamed Morsi, deposed President of Egypt and former Palestinian prime minister and Nobel Peace Prize winner, Yasser Arafat.

Having one of the longest names among today’s universities, the Arab Academy was established to teach Maritime Transport not only to students in Egypt but also for students from Arab countries. Backed by the United Nations, the AASTMT was created in Alexandria to teach the major of maritime transports to the people in the Arab countries.

AASTMT students pay their fees according to their overall percentage in High School and are mainly divided into 3 main categories (A, B, C) as follows:

* All fees are listed per semester in US Dollars.

* To relieve the burdens of parents, Egyptian students with a high school certificate from the Arab Republic of Egypt are allowed to pay the tuition fees in Egyptian pounds according to dollar rate determined by the academy (L.E 10.15) for the first semester Sept. 2018.
* Fees increase by $100 per year.
* New students pay $350 laboratory insurance fees.

Alexandria University aspires to restore and achieve a comprehensive qualitative leap in various fields of knowledge within a framework of noble human values, enabling it to take a leading position in its national, Arab, African, Mediterranean and global environments.

Alexandria University now has 23 Faculties and Institutes that offer undergraduate and postgraduate programs in the following courses;

This Egypt University fee is within £1,000-£1,500 per year, depending on the course and program applied for.

Making contracts with American and European universities worldwide, the MIU offers many courses and programs that combine the Egyptian style with the Western styles. Established in 1996, the Misr University for Science and Technology offers great education opportunity not only for locals but also for international students worldwide.

Currently, the university’s academic structure includes 14 faculties, 1 college, and 2 high institutes plus 12 centers and special units that provide education at the undergraduate, graduate and post-graduate levels.

This Egypt University Fee is around $1,000 per year, depending on the course and program applied for.

Al-Azhar University was founded in 970 or 972 and is connected with the Al-Azhar Mosque in Islamic Cairo. It is known as the oldest degree-awarding university in Egypt and reputed as “Sunni Islam’s most prestigious university”. Al-Azhar is also one of the cheapest universities in Egypt.

It was one of the first universities in the world, and the only one in the Arabic world to survive as a modern university including secular subjects in the curriculum. Currently, the university is regarded as the central hub of Arabic Literature and Islamic studies in the world.

The layout of education at Al-Azhar University is relatively informal just as in its early history; initially no entrance requirements, no formal curriculum, and no degrees. The basic program of studies was—and still is—Islamic law, theology, and the Arabic language.

The undergraduate tuition for this Private University in Egypt is around $1,000 for local students and $2,500 for foreign students per year.

Zagazig University is an Egyptian University in the city of Zagazig, the capital of Al Sharqi Governorate. It was established as an effort by the government to contribute to the renaissance of the nation.  The university began in 1969 as an extension of Ain Shams University and is the seventh university in Egypt in terms of its inception.

The ultimate objective of Zagazig University is to become an Egyptian Public higher institution that provides a distinctive education and academic and developmental leading researches and community services and continuous development of its human resources in the context of innovation, quality, independence, and moral values.

The university has made great strides in all areas, keeping up with the modern age with its six major colleges that offer programs in agriculture, trade, veterinary medicine, human medicine, education, and science. It also operates various research institutes like; Institute of Productive Efficiency, Higher Institute of Civilizations, Institute of Asian Studies and Mubarak Institute of Oncology.