Do you ever catch yourself making excuses when things don’t go entirely your way? Have you ever tried to justify your inability of getting a task done?

In life, excuses and progress are walls apart. People that are given to making excuses don’t progress and vice versa. Looking at the society we are living in, there are hundred of thousands of reasons why you should make excuses to justify failures.

Interestingly, from childhood, no one has ever wished to grow up to become a barrow-pusher or given to doing different sorts of menial jobs. At that infant age, we are full of energy and with potent dreams, determined not to settle for anything less. As children, we make bold plans and dream of adventurous, inspiring career with numerous achievements.

Unfortunately, these dreams get diluted as we grow away from infancy and come face-to-face with our society. We begin to think and learn to settle at whatever the society throws at us, instead of taking the lead. While this is happening to some, some others get motivated by what is happening around them in the society to become successful. They push even harder to achieve the once-envisaged adventurous career rather than succumbing to the many excuses that neuter to many others. The major difference  is that they refuse to let the “common justification” terminate their journeys.

Excuse is seeking to lessen the blame attaching to an offence. It is an explanation given to justify what you knowingly decided to ignore. The more excuses you make and take, the bigger the distance to your success and fulfillment. The less excuses you make and entertain, the shorter the distance to your success. urbandictionary.com defines excuse as tools of incompetence used to build monuments of nothingness.

Excuses are perfectly valid reasons we perfectly invent to defend ourselves for doing/not doing something and those who specialize in them seldom accomplish anything. Excuses are dream killers and progress halters; and are the most destructive forces against your dreams. 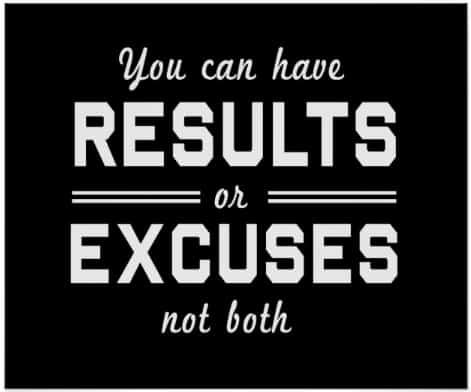 Why People give Excuses

10 Excuses that will Kill your dreams

Avoid These Excuses if you want to truly fulfill your dreams !!!